Chapter 66Of Sticks and Stones

Maeve walked up to us, her naked skin glowing even in the cave. The charm around her had been toned down a little, but it still held some sway over us. Of course our awareness of it, did make it easier to cope with. Her charm was like the sweet smell of a freshly baked pie. The smell would be perfect, rich and alluring, but the pie had razorblades in it.

Maybe not the best simile ever, but it helped me keep my mind clear.

"Her elements..." A thought from my studies arrived. "The four elements?"

Maeve. "Deirdre is right. There are five elements. Let me show you something they probably didn't teach you." 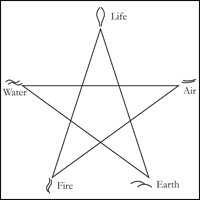 She drew a simple pentagram on the ground with lines that appeared to glow slightly. I wasn't even sure how she actually did the drawing, as she didn't hold anything in her hands. Anyway, she made a symbol at each point. The top point was two lines making a leaf, then clockwise; two lines moving up, like wind, two lines depicting hills, two wavy lines upward and two wavy lines sideways. I recognized the elements, air, earth, fire and water. And I assumed the top one was life.

But I'd never seen it drawn like this before.

Maeve looked at us. "Have you seen this before?"

Deirdre nodded. "I have."

Maeve. "Life at the top, connected to fire and earth as life needs the sun and earth to grow. Water and air are needed as well but not directly. Each line is a connection, each missing line is a sign that they don't mix well. Can you match it to your dreams now, Taran?"

I started with life, the forest. Then to fire. The next dream was earth to life, water to earth, air to water and fire to air. Alright, at least I saw the connection and the odd path I had walked. But why?

"I suppose I understand this now. But why the dreams?"

Maeve giggled. "Well, I suppose those wishing to use the elements need to meet them first."

Deirdre blinked. "Why him and not me?"

She smiled at her. "You have... other qualities which, I'm sure, will display themselves again."

I tried to keep up. "You mean I can use the elements in my magic? Create fire, destroy earth?"

Maeve laughed. "You are the sun and moon, you can do almost anything. The problem is that it takes a lot of training to do a small thing." She handed me a dry twig. I didn't know from where she made that appear, but I wasn't going to ask now. "Try and make fire on this."

Manipulating the elements was something only a lucky few of the Masters could do. Pushing an element was easy, making fire burn hotter or almost dousing it. Actually creating an element felt a lot harder. But... Weren't all elements present in the world around us, even if we couldn't see them. They were there in potential. Almost there, they just needed a little push.

I focused on the dry twig, trying to see the fire that hid beneath the surface. And I found it. While my head hurt with concentration, I could feel how I pushed against the fire in the wood, making it stronger, urging it on.

The tiniest of flames licked the surface of the twig. Visible only because of the darkness in the cave. Though it gave me great pleasure, my mind was less happy about the situation. I tried to calm down, my fingers clenched around the twig.

Deirdre smiled at me. "Very nice, Taran! I saw it too."

Maeve spoke softly. "I'm sorry I can't teach you more Taran. You'll have to practice on your way back to Dawnbridge."

She smiled. "I've asked... some friends to transport you here. This is a hidden cave not far from Dawnbridge. The sun is rising now. If you hurry, you can reach the city by nightfall."

Deirdre looked at me. "Won't they be suspicious if we arrive this quickly?"

I shook my head. "We've stayed in Rockwall for almost as long as we needed to get there. And we 'lost' a day coming here. But what about horses?"

Maeve nodded. "I've arranged two horses. Though the other two were not keen to see you go. They are saddled up and ready. One thing though."

"They are a bit... wild. They've had us on their backs, but no humans. They're clever though."